One of my coworkers, Shane, has a violent hatred of the song The Fox (What Does the Fox Say) by Ylvis.

(If you have no idea what I’m talking about, please visit this link and join the rest of the people who either hate it or love it. And if you you’re wondering what the hell they were thinking when they wrote it, you should take a look at some of their other songs***.)

My coworker dislikes the song so much, that if one of us turns it on while in the lab–usually just to annoy him–he’ll leave the room.

So when I found a large Halloween card with a fox on it last month, I HAD to buy it. The inside was fairly blah… (and a trip to Kinkos to print it out since we haven’t replaced our dead printer yet).

…this is what Shane received for Halloween…

It’s a good thing he has a sense of humor.

***The song Work It is another one of my favorites, but it’s definitely not safe for kids. 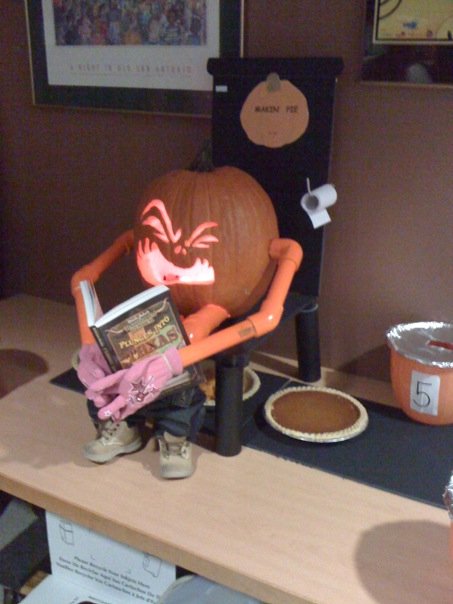 Here are the naked cupcakes: …and here are the finished cupcake designs for this year: This is the last year of the eyeball. I lost the tip I used last year and my local supplier was out, so the eyelids are wonky. Besides, the gummy eyes are really disgusting to eat. Who came up with the idea for an unidentifiable fruit flavor for eyeballs anyway?

Halloween was busy for not going out and doing anything.  I spent the week making cupcakes for the hubby-love and I to take in to work, as well as a cupcake cake for a friend (to be posted later).  I also dressed up for work so I could compete in the company costume contest.

I did the zombie thing again this year, but this time I won a prize for the scariest costume.  I ended up with a nice stoneware set that I'm looking forward to using during the holidays. I also managed to convince my husband to purchase one of those silly hats for the cats and we spent an afternoon tormenting them.  We had so much fun that we went out and bought two more hats for next year.

You can tell Molly isn't very happy with us.  We tortured Nemo and Kuro as well, but left Miette alone because she's all muscle.  That, and she took off the moment we pulled out the hat.

I will kill you while you sleep…